You are here: Home / Preparing / Getting Rid of it All to Become Mobile and Travel the World

We decided to get rid of (almost) everything we own so that we can become location independent and travel the world. Of course we’ve kept some essentials in addition to sentimental items such as photo albums that we’re driving down to Florida to store a few boxes with family. But everything else is now gone.

This has been a long-term five-year plan, so even though we’re married in our 30s with a decent income, we’ve strategically been putting off all major household purchases such as nice furniture. Most of our furniture are pieces we bought second-hand or from Ikea. If we were to store that crap for a year or so, we would spend more money on storage than we would buying nice new furniture upon returning.

Quitting my job was probably the most difficult step in this process for me, but purging our belongings was probably the most difficult thing to do for the wife. It was painful. Going through the sorting process (sell, donate, toss) with her felt like an episode of Hoarders. She even cried at points. There’s really a lot memories and emotional attachment to your possessions that you may not realize until you’re forced to potentially part with them. It’s tough. Imagine trying to condense every single thing you own so that in can fit into your car. What would you take? What would you come to terms with tossing? This is what we’ve been facing this past week. You really don’t even realize how much crap you own that you actually care about until you go through this process. It all adds up very quickly.

We were initially considering moving and storing our belongings but ultimately decided it makes much more sense to simply sell, donate, or toss instead. There’s no need to spend thousands of dollars to move and store these items when we can instead spend thousands to simply buy similar items brand new upon returning.

So here’s how it all went:

Step 1: Decluttering and donating. We went through all of our belongings and determined items (particularly clothes) that were of little to no value and we didn’t use anymore. I’m almost embarrassed to admit that we were able to pack an entire pickup truck full of items like that. I truly had no idea how much crap we had accumulated that is virtually worthless and we don’t use. So that pickup truck went directly to the Salvation Army and hopefully they can find some new homes for it all.

Step 2: eBay. We sold smaller electronics and more niche items on eBay. Doing this we were able to get top dollar for a lot of various items (tablets, formal ware, niche textbooks, etc.) I even was able to sell broken electronics for a few bucks that were bought for their parts or to potentially attempt to repair. Things like that would never even fetch a quarter at a garage sale but there are people out there on eBay who were happy to pay me $7 plus shipping for an old digital camera that stopped working ages ago. But it was the electronics that were in working condition that sold particularly well and I was pleasantly surprised to find how close to retail value our used electronics were still worth.

Step 3: Moving Sale. After the great eBay eradication, we then hosted a moving sale. Craigslist ad was posted, signs were put up around town, price tags were placed on just about everything, and our house was opened up to Detroit area pickers far and wide. But we had a bit of a lucky break when landlord stopped by the night before the moving sale to do a test on the floors to see if whether or not they needed to be refinished. When she learned we were selling our furniture, she decided to buy nearly all of it in order to keep the house furnished. So we had sold almost all the furniture before the moving sale even began!

Then during the moving sale itself, everything was priced to move and most items were around 20% of their original value for items in good condition. By the first hour of the sale, we had sold nearly everything! It was actually pretty unbelievable (and awesome) that people wanted and would pay for all of our used junk. 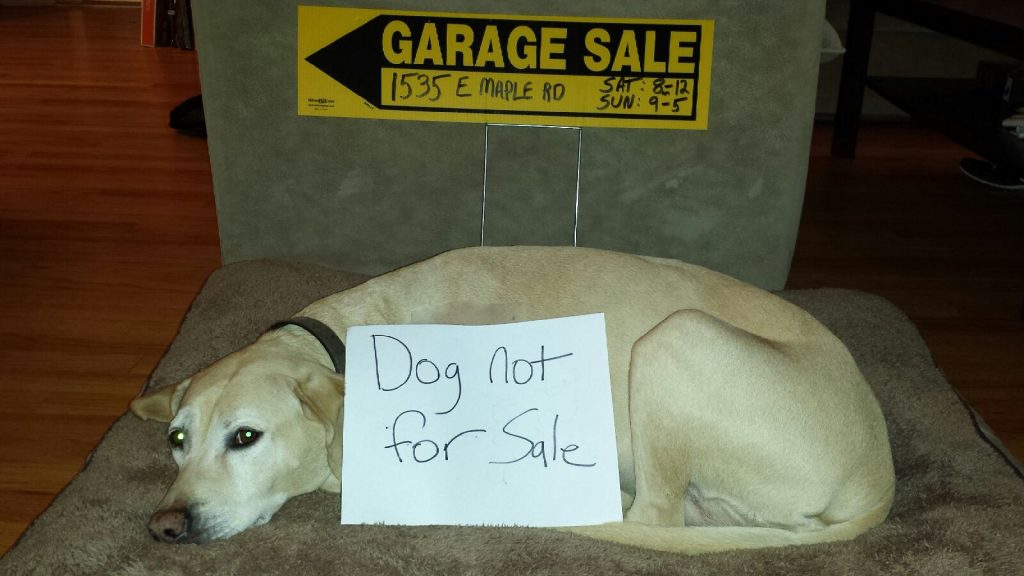 Overall, we made about $1,500. It’s certainly not much, but that’s an extra $1,500 in our pockets by simply selling the items that we will no longer need during our mobile lifestyle ahead. This sum has been added to the savings pot to repurchase similar items upon return and will even earn a tiny bit of interest while we’re away. Alternatively we could have paid about $1,500 to store our belongings for a year then probably another $1,500 to move those items to wherever we decide to live upon returning. When you look at it is this way, you can see how we came to the decision of selling our belongings. What is comes down to is a choice between a debit of $3,000 to come back to our old junk or add $1,500+ in our pockets to spend towards new belongings. What would you have done?

Step 4: Packing and purging. There were a number of items that we planned to hang on to and store, so those items were packed up. Whatever we weren’t able to sell at the moving sale was put to the curb, brought to a second (smaller) run to the Salvation Army, and perhaps we packed a few additional items that didn’t sell in which we couldn’t bare to part with. (Hey, those Thanksgiving pilgrim salt and pepper shakers are pretty awesome after all.)

Don’t buy so much goddamn stuff! (Ok, well, that’s my lesson to her, but she’s confirmed that she has in fact learned this lesson.) There’s absolutely no reason to own 43 pairs of shoes or 37 pairs of jeans, particularly given the fact we’ve supposedly been committed to saving for this trip. And there’s really no point to store dozens of pairs of shoes, jeans, or other clothing. Styles will change and those fashions may likely be outdated. So goodbye shoes! (End of rant.) 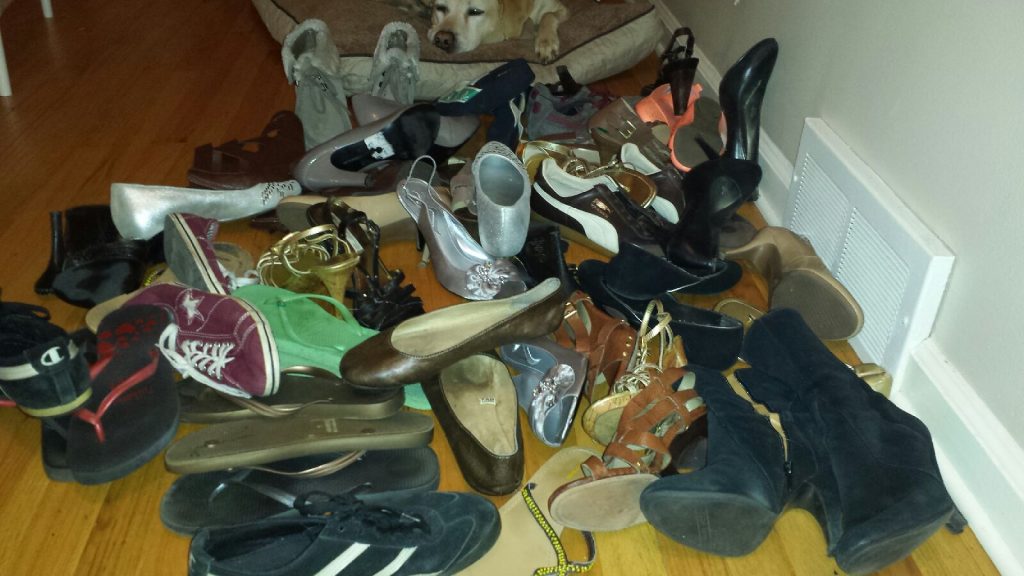 It’s a good to keep boxes. Heather keeps all the boxes and owners manuals to everything we buy. Against my better judgment, we have a basement full of empty boxes. But you know what? We actually sold many of the things we own for exactly the same price we paid for them. That means we basically got to use these items for the past several years for free! I love this. So lesson learned – keep your boxes if you ever think you may sell your used belongings.

Overall, the entire process was difficult, even for me. It really is tough to get rid of possessions that you love. But now that’s its over, I feel good. I feel free. I am happy. We can now have mobility and we don’t have “things” holding us down. This is one giant step closer to roaming around the world.